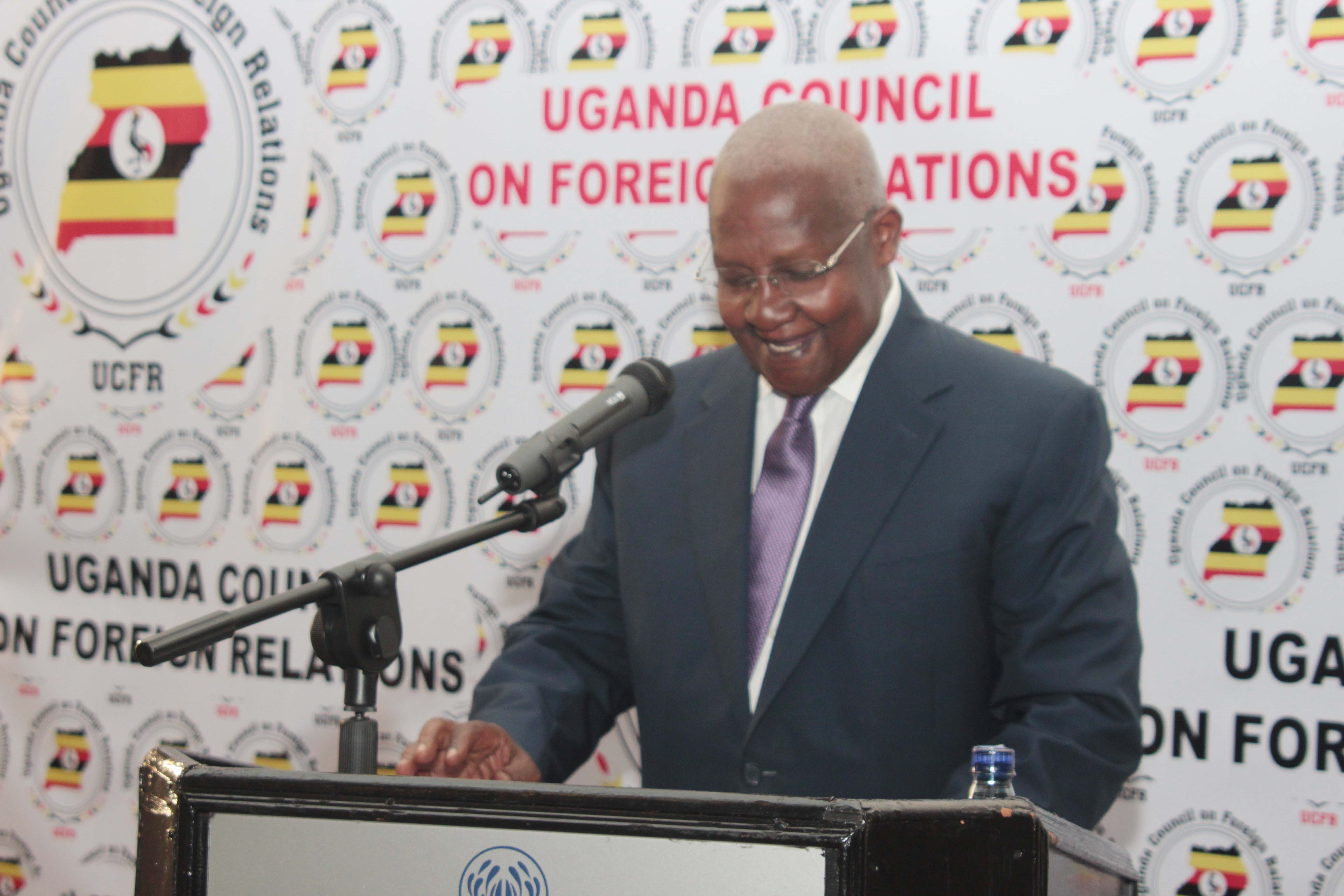 THE LAUNCH OF THE UGANDA COUNCIL ON FOREIGN RELATIONS

Members of the Uganda Council on Foreign Relations,

Your Excellencies Heads of Diplomatic Missions,

Good afternoon! Thank you for inviting me to address this gathering of stakeholders, friends and practitioners of foreign relations.

As the world around us changes and evolves, so has the conduct of foreign affairs and international relations. We are in a state of constant challenges and opportunities. The institutional framework for conducting international relations and foreign policy implementation has changed. Now, more than ever before, foreign policy formulation and implementation is carried out by many actors and stakeholders. Invariably, they are also affected by it.

While the role of the Ministry of Foreign Affairs remains central, regional and sub-regional organizations; the media; and civil society actors have taken on an important role. Across the world, international relations and foreign policy think-tanks have been established to support and influence policy formulation and implementation. Our gathering here this afternoon is to support a similar endeavor – namely, to formally launch the Uganda Council on Foreign Relations. I will return to this later.

Those of you who attended, or have read President Yoweri Museveni’s State of the Nation Address, delivered on 31st May, recall the emphasis he placed on East Africa’s integration. He pointed out, and I quote: “the political and economic integration of East Africa is not just for sentimental reasons. It is in order to ensure our prosperity….The 160 million people East African market should be used to pull investments for the prosperity of our people”, end quote.

As I will highlight shortly, deepening regional cooperation and integration is now central to our foreign policy. And this brings me to the theme of my talk this afternoon. As we are here to launch a Council on Foreign Relations, the theme I chose is: “Reorienting Uganda’s Foreign Policy: Addressing Contemporary Foreign Policy Challenges”. As we move forward, I will be interested in hearing your views on how the Council we are launching can contribute to Government’s efforts. How can we work together, to formulate and deliver a foreign policy that supports Uganda’s prosperity and transformation?

By all standards, we have a new world order, and it will continue to evolve. No doubt, this requires that we realign our foreign policy to fit in the new world order.

Politically, countries and non-state actors alike, continue to challenge the super-power notion that dominated international discourse not too long ago. New challenges to peace and security continue to emerge, even with our best efforts to stop them. Almost on a daily basis, horrifying stories and images of terrorist attacks or terror-related arrests are brought to our attention. By 2014, according to the Institute for Economics and Peace, there was a nine-fold increase in the number of deaths from terrorism since 2000, rising from 3,329 to 32,685 in 2014.

Apart from Al-qaeda, there has been an emergence of ‘home grown’ terrorist organizations in Africa, such as the LRA, Al-Shabab and Boko Haram. Their threats not only affect national security, but also regional and international peace and security, and cannot therefore be taken lightly.

Lately, human and drug trafficking has been on the increase, and undermines peace and security. We are all aware of its effects in places like the Gulf of Guinea, and indeed off the Libyan coast currently. Unfortunately, Uganda has lately become a vibrant drug trafficking transit center. Today, many Ugandans are in prisons across many countries due to drug-related offences, with some sentenced to death. Addressing poverty levels among communities will be one way of stopping this vice.

The nature and conduct of international politics is also changing. Humanitarian intervention has somehow become an important value. Individually or collectively, countries can directly intervene, even cause regime change in other countries, all in the name of the responsibility to protect. While it is conceptually a good principle, for countries to protect their citizens against mass atrocities such as genocide, its enforcement and effects has thus far left divided opinion.

Today, if you ask our friends in Europe, the experience and effects could not have been predicted. The humanitarian intervention in Libya, with the express authorisation of the Security Council, has left a near failed state on our shores.

Annually, Libya has become a major contributor to the growing number of migrants and refugees crossing into Europe. Elsewhere, technological advances have unleashed almost uncontrollable social media platforms which are used by many to incite violence against governments. There is no telling how much political damage it can do.

On the socio-economic front, issues like demography and the population explosion have become important. Not only do they affect national planning, but also cause diverse effects on the environment and climate change. In addition, population growth has exacerbated the growing demand for energy resources, sometimes heightening the risk of tensions among nations due to increased competition.

ICT continues to revolutionalise our way of life. Financially, it has provided a platform to transfer money to the remotest parts of the country, through mobile phones. Over night, it has transformed commerce and trade. But most important, it has facilitated instant communication and exchange of information between people worlds apart. This, to me, is the single most important innovation in recent times.

However, it has created problems of its own for the international community to contend with. Crimes previously unknown to us, such as cyber crime have become common place. Money laundering is also on the rise. By its illicit nature, it is difficult to have accurate estimates. However, the United Nations Office on drugs and Crime estimates that, 2 -5 percent of global GDP, or between USD 800 billion – 2 trillion is laundered globally every year.

There is also the international financial problem which has refused to go away, affecting big and small countries alike. With new international financing requirements for climate change and sustainable development goals, big financing gaps exist. Inevitably, developing countries such as Uganda, as well as regional and sub-regional organizations must find ways to generate own monies to finance their priorities. As austerity measures increase across Europe, bilateral and multilateral funding is bound to reduce, as it is happening with AMISOM. Foreign direct investment is also likely to reduce, at least in the short term.

Take the example of China, on one hand. In 2015, trade volumes between China and the United States, according to the Government of China, reached USD 558.4 billion, making China the second largest trading partner with the United States. Yet, the two countries are negotiating a Bilateral Investment Treaty, with a view to further strengthen their trade and investment portfolio.

On the other hand, according to the European Commission, EU’s investment in the United States is around eight times the amount of EU’s investment in India and China. Together, the economies of the EU and US account for about half of the entire world GDP, and for nearly one third of the world’s trade flows.

Yet, the European Commission and the United States are holding talks for a trade and investment agreement to increase trade and investment among them. According to the European Union Commission, eliminating or harmonizing one quarter of existing non-tariff barriers in trade alone, could boost a combined EU and US GDP by USD 106 billion annually. These are major developments that should interest us.

While our foreign policy must address and be concerned by the above issues, and many others emerging, it must also be tailored to contribute to our national priorities. Three years ago, in 2013, we launched Vision 2040, with the aim of transforming Uganda from a peasant to a modern and prosperous country within 30 years.

We must be useful in addressing some of the major bottlenecks impeding Uganda’s progress, such as: a weak private sector; inadequate and underdeveloped human resources; limited industrialization and value addition; limited government investment in strategic and emerging industries; undeveloped services sector; underdeveloped agriculture; low competitiveness of Ugandan goods; and poor and limited infrastructure; and high energy costs.

Recently, we reviewed our foreign policy. Its central pillar is to enhance regional cooperation and integration, while building strategic international partnerships to support our development. We are emphasizing the following major priorities:

First, supporting regional and international peace and security. As a Landlocked country, it is of strategic interest that our neighbours are all safe and secure. When regional peace and security is disturbed, so will our imports and exports, and by extension our development. This explains why we are interested in strengthening preventive diplomacy, peace support and peace building initiatives in the region. To preserve peace, it is important that we combat cross-border crimes such as terrorism, human trafficking, illicit small arms trade, smuggling, and money laundering.

It is equally important that we support frameworks on the management and protection of shared trans-boundary natural resources, to ensure their equitable and sustainable use.

Second, we have dedicated our efforts towards deepening regional cooperation and integration, and international cooperation. The East African Community, for Uganda, is at the forefront. However, we are also harmonising policies with other sub-regional organizations, through the EAC-COMESA-SADC tripartite arrangements, with a view to reducing overlap and enhancing efficiency.

In order to promote regional policies that create the greatest impact for the country, we have reinvigorated the Northern Corridor through a series of integration projects. The intention is to spur growth; ease and facilitate regional trade; and add value to our raw materials. We have also agreed to develop infrastructure for the Southern route at Tanga, starting with the oil pipeline. Regional and international partnerships, including the involvement of the private sector, will be critical to realise our objectives.

Partnerships such as ACP-EU, FOCAC, India-Africa, TICAD and Afro-Arab Cooperation have been critical is supporting Uganda’s development. With the implementation of the SDGs, such partersnips have become even more relevant. The question that begs our attention is this: How can we, as country, ensure maximum benefits from these regional cooperation frameworks?

Third, we are emphasizing commercial and economic diplomacy. Strengthening multilateral economic cooperation, including South-South cooperation is critical. We must develop favourable rules-based trading regimes to allow access to markets. Our challenge, domestically, remains inadequate production and supply of quality poducts. Efforts at industrialisation and agro-processing must be doubled.

Other important priority considerations include:

In brief, these are some of the emerging challenges and issues. I have also outlined the sort of foreign policy reorientation we are undergoing. How then will the Council we are launching contribute to it?

I have been informed that the Council will, inter alia: carry out regular panel and expert discussions and workshops on topical issues; conduct research on foreign policy-related issues; provide a platform for foreign policy debate and advocacy; and engage government, national, regional and international bodies on foreign policy formulation.

These are good ideals to pursue, and I am looking forward to the Council’s contribution to supporting Uganda’s continuing foreign policy development. The research, debates and discussions you carry out must be relevant and support Uganda’s development.

Going forward, creating regional and international partnerships and negotiation meaningful bilateral trade and investment deals will be crucial for our development. I expect this council to generate ideas that could support our efforts on these and other important issues.

I thank you for your kind attention.